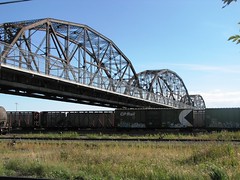 Back in February 2013 the city received a report which led them to downgrade the state of the Arlington Bridge‘s condition to poor and to begin the planning process to decommission it in 2020.

That leaves them with just six years to come up an alternative and the CPR Yards Crossing Study is meant to find it.

On Thursday, Dec. 4, 2014, nearly 40 members of the public got together for the first public consultation meeting for that study. It consisted of a bus tour of three of the four crossings, (McPhillips Street Underpass, Arlington Street Bridge and Slaw Rebchuk Bridge, but not the Main Street Underpass), then it was back to Rossbrook House for a brief presentation and to do some community consultation activities. 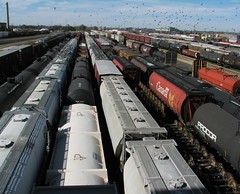 At the start of the evening, it was said that everything was on the table, but that wasn’t really the case.

The question of moving the CPR yards was verboten. That is being carried on by another group and was not to be considered as an alternative. (I couldn’t help thinking, though, that if the city was to commit to spending, say, $50 million on a new bridge plus 40 years of related maintenance costs, what would happen if they dropped a bag filled with $50 million on the CPR’s doorstep – would it be an incentive to move if they added that to what other levels of government might kick in?)

Another item not to be considered was retaining all or part of the existing bridge. Though it is the loads and vibrations of vehicle traffic that kills a bridge, removing vehicle traffic and rehabbing it for, say, a pedestrian / cycling / lookout area is not in the cards. The bridge IS coming down in 2020. It was mentioned, though, that the supports of the bridge were in good condition and could be used to support a new bridge deck.

The options on the table were to replace the old bridge with a new one, not replace it and upgrade an existing crossing(s) or to provide just a pedestrian link.

There were some interesting stats about traffic. Above is data I jotted down from the PowerPoint presentation that was given.

In terms of traffic flow, something of interest to folks like me who live around Arlington Street south of Notre Dame is where traffic ends up. On the Slaw Rebchuk Bridge, for instance, over 40 per cent of drivers heading southbound turn at Logan and another large batch do the same at William. For those traveling south on the Arlington Bridge, only 1 per cent turn off. That tells me that whatever happens with the Arlington crossing has a big impact many blocks away, right to Portage Avenue.

Interestingly, the Slaw Rebchuk Bridge is the only unrestricted crossing between the North End and the rest of the city. The McPhillips Street Underpass, which gets the most traffic when the Arlington Bridge is closed, was constructed in the 1960s and is nearly two metres short of what would today be considered an acceptable clearance height for city traffic. Rebuilding that underpass could be an option, but at that site there is major underground infrastructure, including a pipe from the aqueduct, that would have to be relocated at great expense. 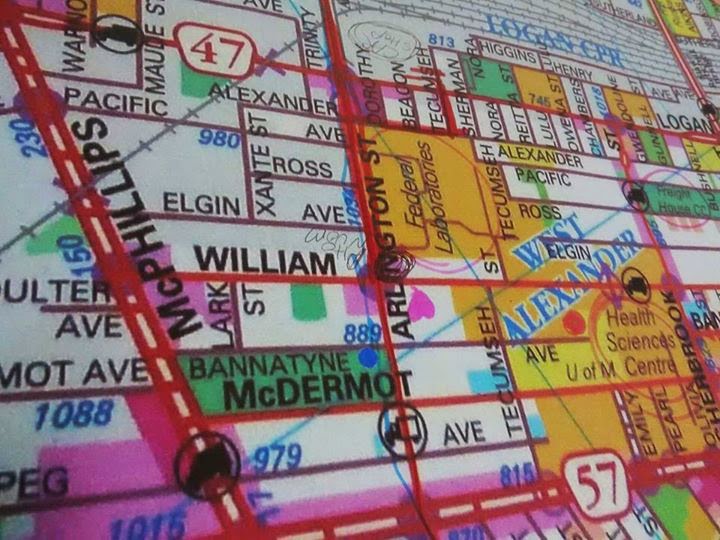 The main focus for this first consultation was to get to know the communities around the bridge. What do we use the bridge for ? What amenities do we cross the bridge to get to? What alternatives would there be if there was either no bridge or an expanded bridge ?

The information will be used to build the second consultation session in early 2015 which will focus on “bigger picture” ideas about what to do about a new span.

For more about the CPR Yards Crossing Study, which will soon have an active online survey for those who could not attend. Here’s a history of the Arlington Bridge.

All photos courtesy of Christian Cassidy.